The Secrets of Avian Body Odor

Our understanding of how chemicals mediate animal behavior is mostly limited to a handful of organisms. No group has been more overlooked than birds, where scent guided behaviors are cryptic, and until recently, olfaction was considered unimportant. A crucial step for disentangling how olfaction influences avian ecology is to understand the diversity of compounds produced by birds and the types of information contained within these aromas. My research investigates the body odor of birds. In particular, I focus on the volatile chemicals emitted by avian plumage to understand the chemical information that is present when one bird encounters another. Some key questions include:
Relevant publications:
Jennings SL, Ebeler SE. 2020. Individual chemical signatures in Leach’s storm-petrels (Oceanodroma leucorhoa). Journal of Chemical Ecology 46: 845-864. ​https://doi.org/10.1007/s10886-020-01207-0 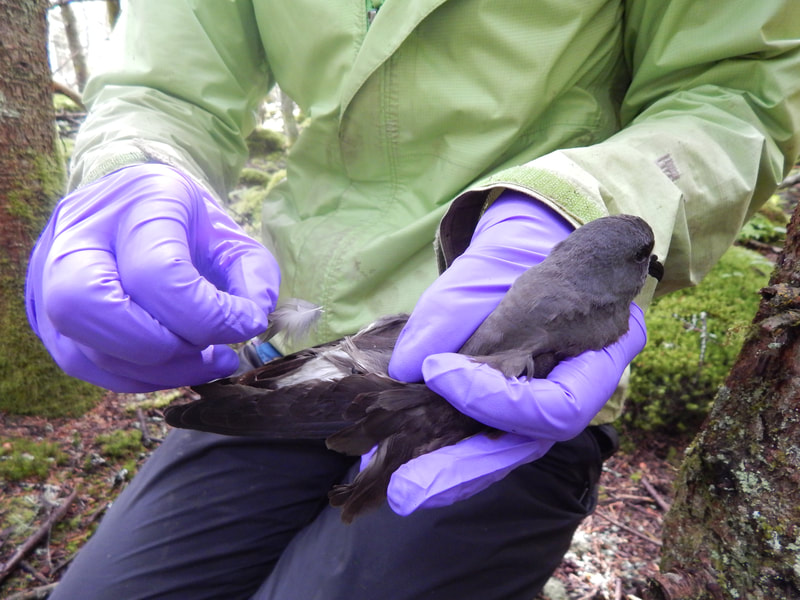 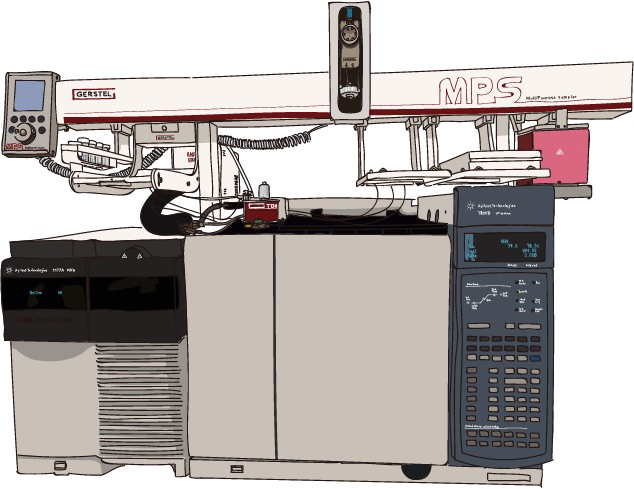 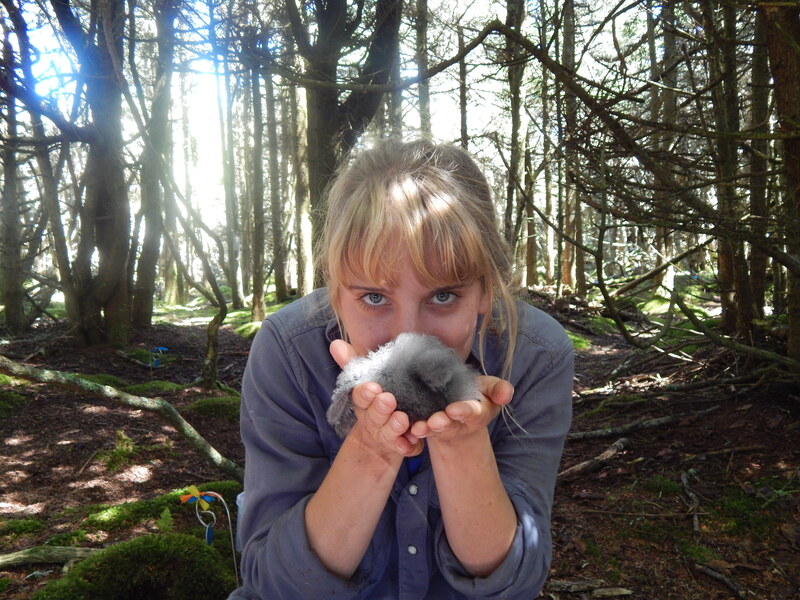 Organisms regularly assess the genetic makeup of conspecifics to enhance their own fitness. In the context of breeding, this can facilitate inbreeding avoidance or allow for the selection of a genetically compatible mate. In vertebrates, the immune genes of the major histocompatibility complex (MHC) are of particular interest because they have been linked to both mate choice and kin recognition. MHC is thought to influence body odor and olfaction is presumed to be the mechanism that organisms use to evaluate conspecifics. However, it is currently unclear how widespread the link between MHC and odor is across vertebrates, and this connection has rarely been studied in birds.
​
I am part of an interdisciplinary team studying the genetic basis of mate choice in the Leach’s storm-petrel, which is a long-lived, monogamous seabird species. Both male and female storm-petrels invest heavily in parental care, thus MHC-based mate choice may impart both direct benefits (e.g., securing a high-quality mate) and indirect benefits (e.g., offspring with increased immunocompetence). Moreover, Leach’s storm-petrels have a large olfactory anatomy, an excellent sense of smell, and a pungent plumage odor. These aspects of their natural history make them an interesting candidate for investigating the role of MHC in their breeding biology. Some of the questions we aim to address with this research are:
Relevant publications:
Pearce DS, Hoover BA, Jennings SL, Nevitt GA, & Docherty KM. 2017. Morphological and genetic factors shape the microbiome of a seabird species (Oceanodroma leucorhoa) more than environmental and social factors. Microbiome 5(1):146. https://doi.org/10.1186/s40168-017-0365-4 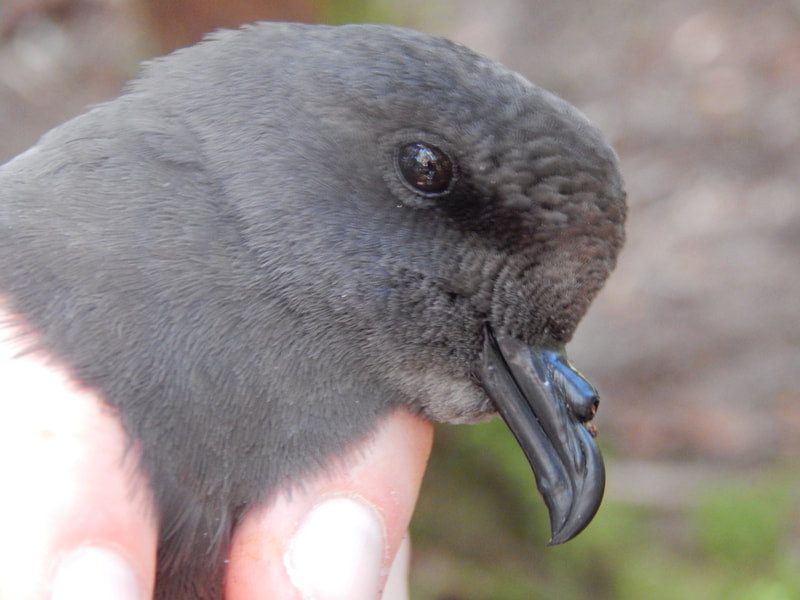 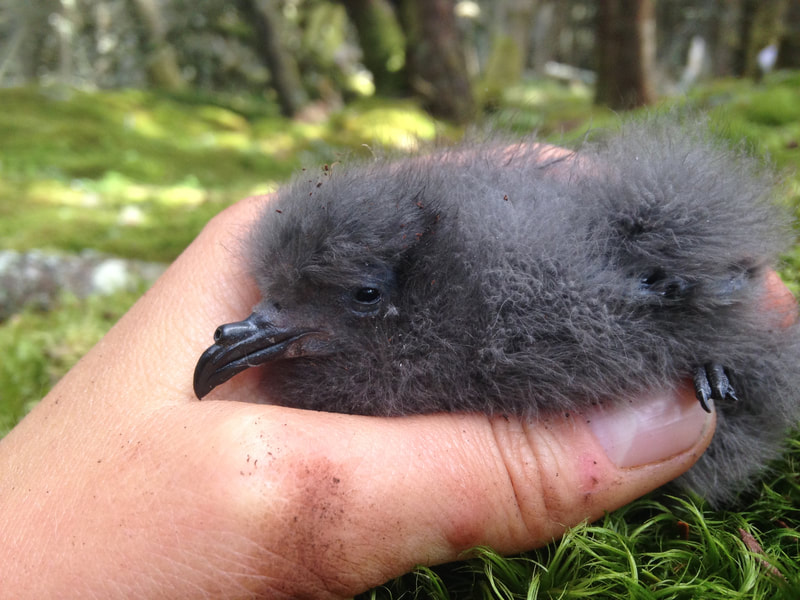 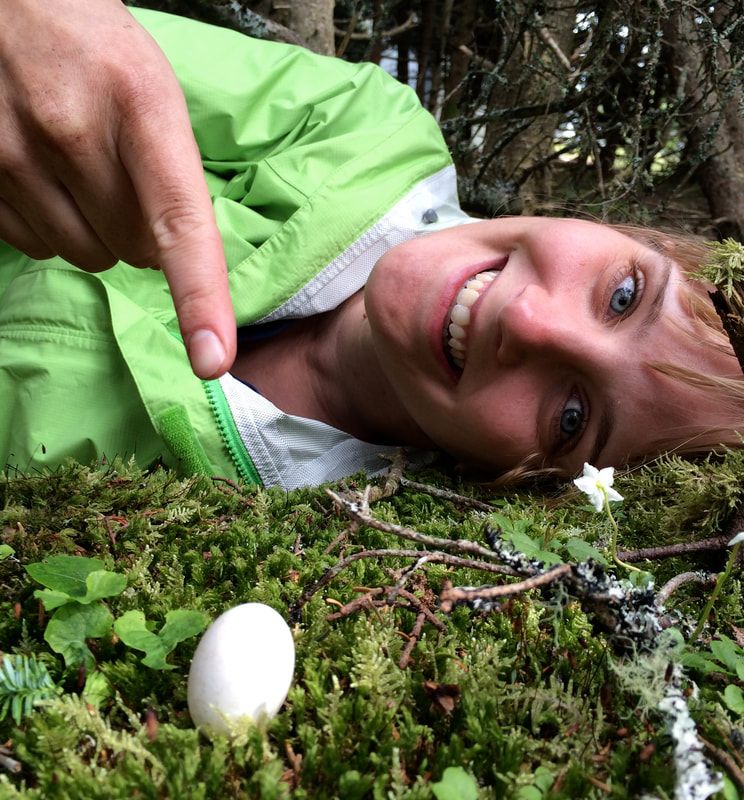 Many animals maneuver around their worlds to locate food, avoid predators, attract mates, and find shelter. Movement that involves returning to a specific, familiar site is called homing. Individuals rely on a wide variety of external and internal inputs to home. Olfactory homing in a wide range of taxonomic groups (e.g., social insects, fish, mammals) has been linked to different sources of chemicals. Some organisms use chemicals associated with a particular landscape feature, while others make use of self- or conspecific-produced chemicals that are deposited in the environment. Leach’s storm-petrels rely on olfaction to navigate to their breeding colony and to locate their underground burrow. However, it is unclear what type(s) of chemical information they use for homing. I am investigating the chemical information present in the colony landscape and the storm-petrels that occupy it to answer the following questions:​
Relevant publications:
Jennings SL, Ebeler SE. Smells like home: bird-scented nests as a mechanism for olfactory homing in a burrow nesting seabird. In Prep. 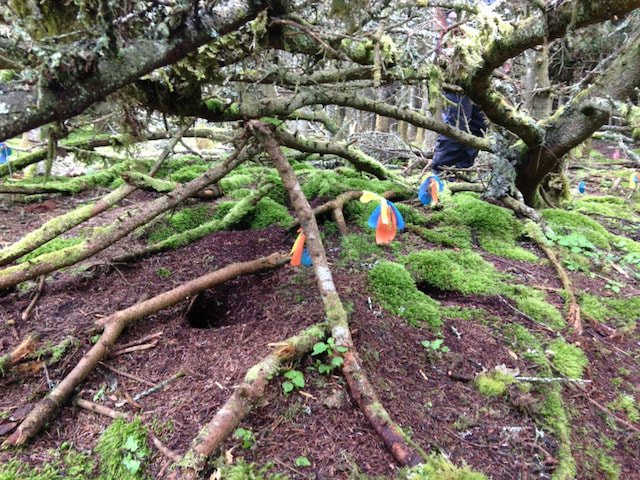 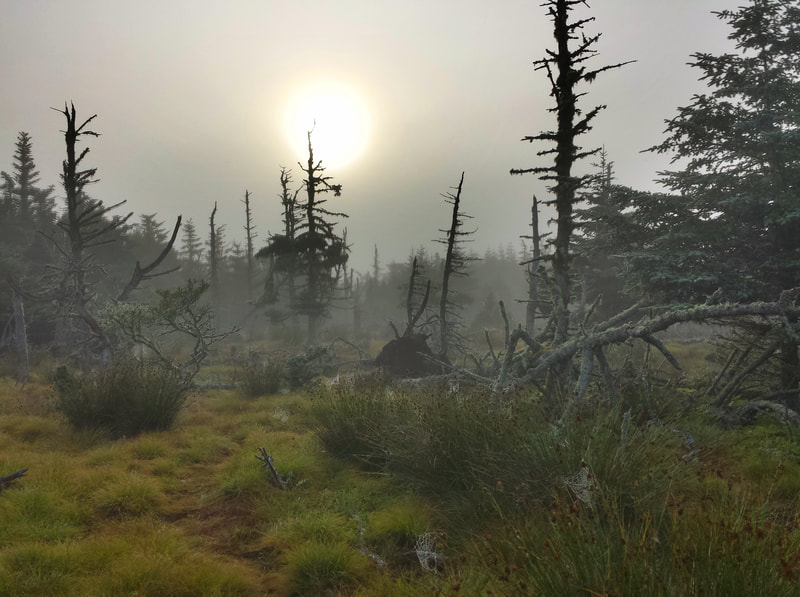 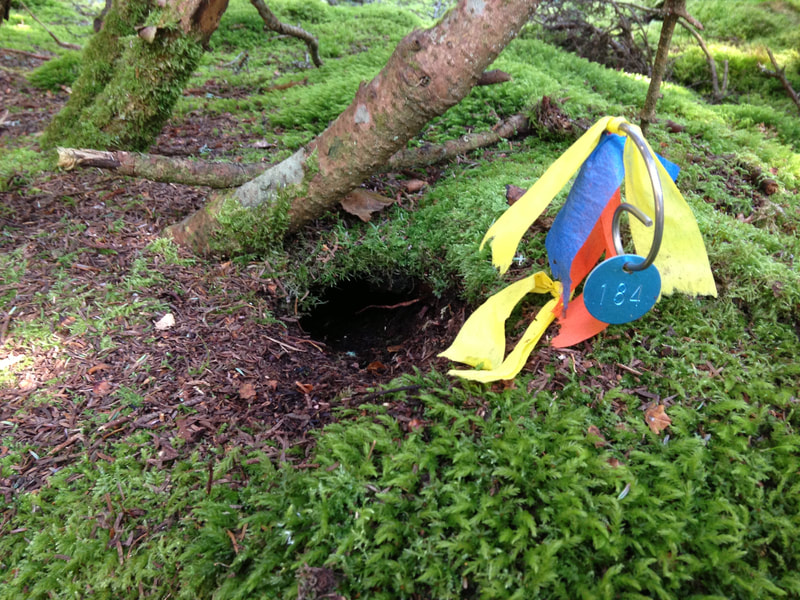 The vast majority of birds display biparental care, which makes them an outlier in the animal kingdom. Among biparental species, each sex often takes on specific duties. A number of bird species are visually monomorphic, namely long-lived seabirds, and the division of parental care duties in these species has remained less well understood due to the challenge of assigning behaviors to individuals that are visually indistinguishable. Many of these monomorphic seabirds are also monogamous and form long-term partnerships that last across multiple breeding seasons. Thus, another area of interest is how increased mate familiarity (more experience as a pair) influences sex-specific parental care behaviors and overall reproductive success. The recent proliferation of light-weight tags, such as RFID (radio frequency identification) readers and PIT (passive integrated transponder) tags, allow for the collection of detailed behavioral recordings from a large sample size of individuals of known sex. I am a collaborator on several projects using this technology where we aim to address the following questions related to parental care:
Relevant publications:
Tyson CW, Jennings SL, Hoover BA, Miles AE. Energetic constraints drive sex-specific parental care in a monomorphic seabird, the Leach's storm-petrel (Oceanodroma leucorhoa). In Review 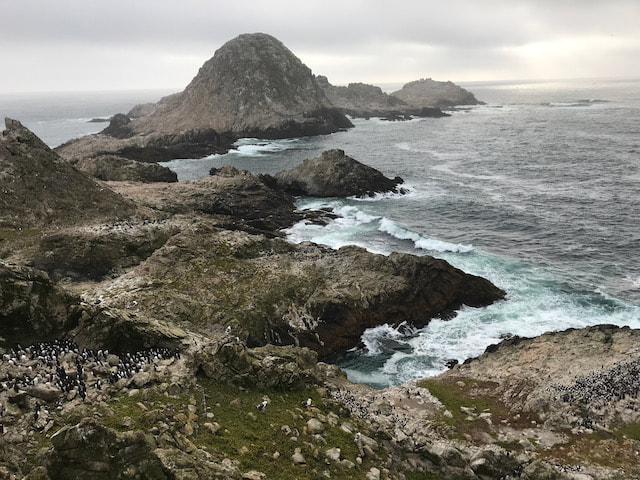 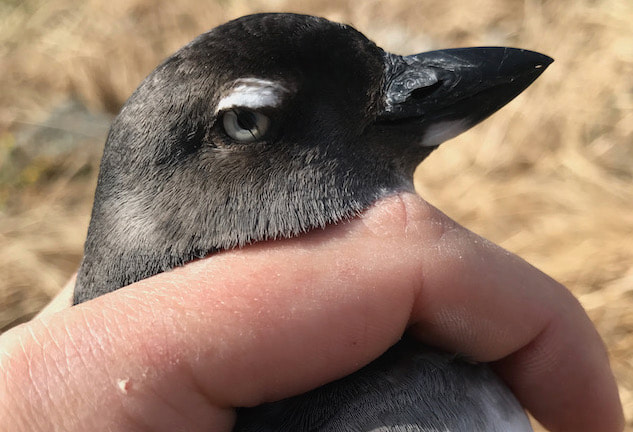 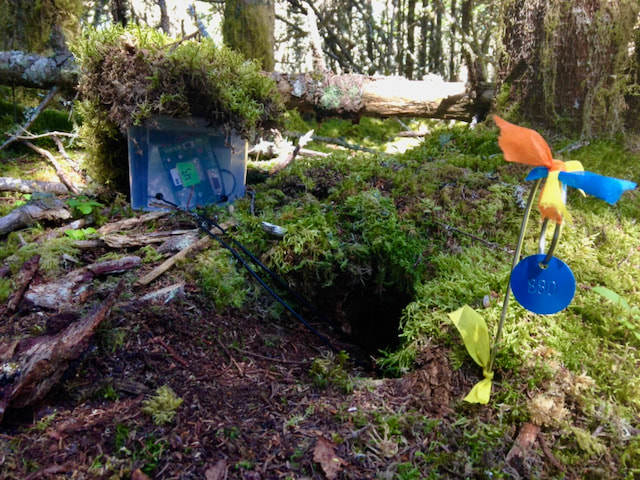 The incidental mortality of non-target organisms in fishing gear, also known as bycatch, is a key factor causing declines in the populations of albatrosses and petrels, which are one of the most endangered avian groups. Seabirds are attracted to fishing vessels, which can provide an easy meal in the form of bait, offal, or discards. As birds forage for these scraps, they can become entangled or caught in fishing gear. Tools and protocols have been developed to mitigate seabird bycatch but they have not been implemented in all fisheries. A key step that can inform the application of mitigation strategies is identifying areas where there is high spatial and temporal overlap in the distribution of seabirds and fisheries effort. Three albatross species can be found foraging in the North Pacific Ocean along the west coast of the US: black-footed albatross, Laysan albatross, and the endangered short-tailed albatross. By combining data on the distribution and density of these three albatross species with fishing effort information for groundfish and shrimp fisheries, we addressed the following questions:
Relevant publications:
Guy TJ, Jennings SL, Suryan RM, Melvin EF, Bellman MA, Anderson DJ, Ballance LT, Blackie BA, Croll DA, Deguchi T, Geernaert TO, Henry RW, Hester M, Hyrenbach KD, Jahncke J, Ozaki K, Roletto J, Sato F, Shaffer SA, Sydeman WJ, Zamon JE. 2013. Overlap of North Pacific albatrosses with the U.S. west coast groundfish and shrimp fisheries. Fisheries Research 147:222-234. https://doi.org/10.1016/j.fishres.2013.06.009 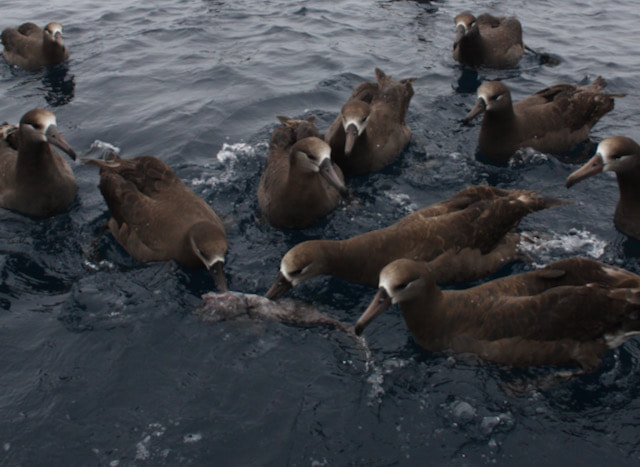 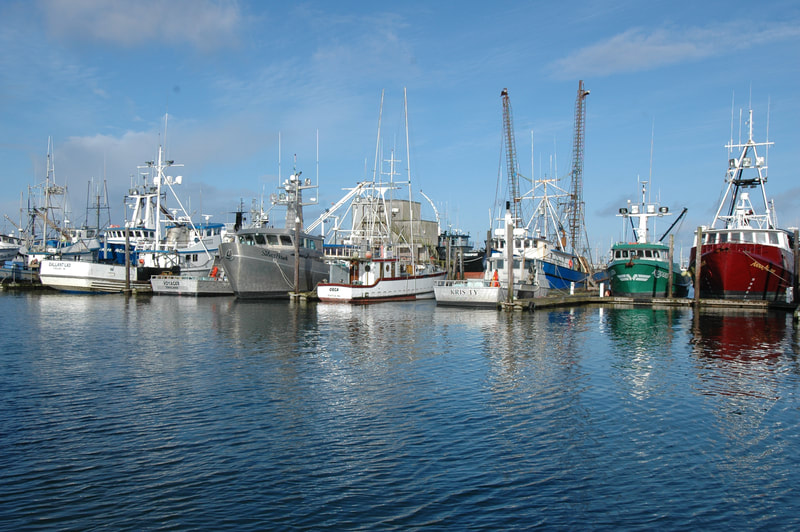